Although Dolphin’s Triton models have been around for years, the latest version was released in 2017 and improves on its predecessors in a few areas. There are a couple of shortcomings with the Triton, but as our review will show it’s a solid pool cleaner overall. 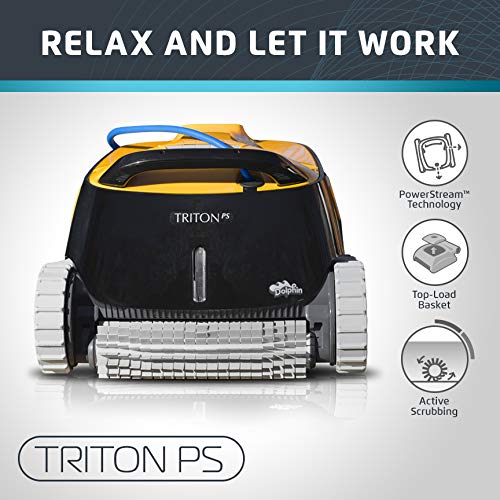 Check out this detailed 10 minute video review of the Dolphin Triton robot pool cleaner, showcasing some of the key features we have given above:

There are lot of robotic pool cleaners, including the Aquabot Turbo T and the iRobot Mirra 530, so let’s compare them with the Triton.

The Turbo T and the Triton do a comparable job cleaning pool floors and walls. They’re also both quiet. However the Triton is easier to clean because the flaps on the Turbo T keep opening making it a bit tricky.

The Turbo T manual also lacks information about the cleaner, and this can frustrate new users. When the Turbo T runs it’s going to clean your pool, but it’s a bit more difficult to get it going.

The iRobot Mirra 530 has the same problem with the instructions. Basically it just tells you to put it in the poll and activate it and you have to figure the rest out.

When the Mirra 530 runs, cleaning is comparable to the Triton, but it’s not intuitive. You also have to use foam inserts so the Mirra can make a 90 degree rotation, but the manual doesn’t explain how many to use.

The Mirra 530 and the Turbo T are decent robotic pool cleaners, but there are issues which affect their performance. The Triton runs without a hitch so it’s more convenient and practical. Since their prices aren’t far apart, the Triton is the better choice as its operation is straightforward.

If you’ve been cleaning your pool by hand, it’s time you go automatic, and we recommend the Dolphin Triton Robotic Pool Cleaner. It cleans pools consistently and rarely leaves debris behind. The design is ideal for residential in-ground pools and it also compares well with other pool cleaners, so it’s a buy.