Are you looking for a robot cleaner that’s compact, affordable and efficient? If you are, you may have heard of the Smartpool NC22 SmartKleen-Robotic Pool Cleaner and about how good it is.

Based on the reviews there’s no question that it’s struck a positive cord with customers, but is this the best robotic cleaner for your pool? 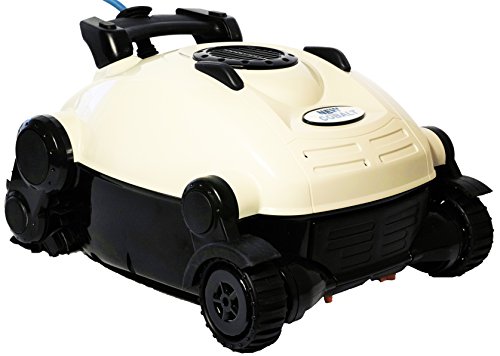 If you want to see this SmartKleen robotic pool cleaner in action then we recommend watching the below video. The video is only 5 minutes long and shows the robot pool vacuum tackling all the common elements of a pool.

You will see how it navigates stairs, along edges and walls and effectively captures a lot of dirt in the process.

The SmartKleen NC22 has solid specs, but how well does it compare to other compact robotic pool cleaners? When it is pitted against Pool Rover S2-40 and the Aquabot APRVJR, the SmartKleen keeps up very well. Price wise the three are very close, but the SmartKleen has the edge in performance.

The S2 does a decent job as a pool cleaner, but it seems to have problems with navigation and often leaves some dirt behind. When the two are pitted head to head, the S2 doesn’t hold up well. There are also customers who say the S2 isn’t durable, and errors appear after using it.

This doesn’t mean the Aquabot APRVJR isn’t any good. On the contrary its cleaning capacity is comparable to the S2 and SmartKleen, but it is inconsistent.

When you consider all of these, it’s easy to pick the SmartKleen NC22 over the other two. Not only is it more reliable, but cleanup is reliable.

The Smartpool NC22 SmartKleen is not the most powerful robotic pool cleaner, and it’s not designed that way. It’s a compact device for cleaning small and average size aboveground and in-ground pools.

As long as you recognize what the SmartKleen can and cannot do you’ll get maximum value for your money. Compared to other similarly priced robot pool cleaners, the SmartKleen provides better results, so we recommend it.